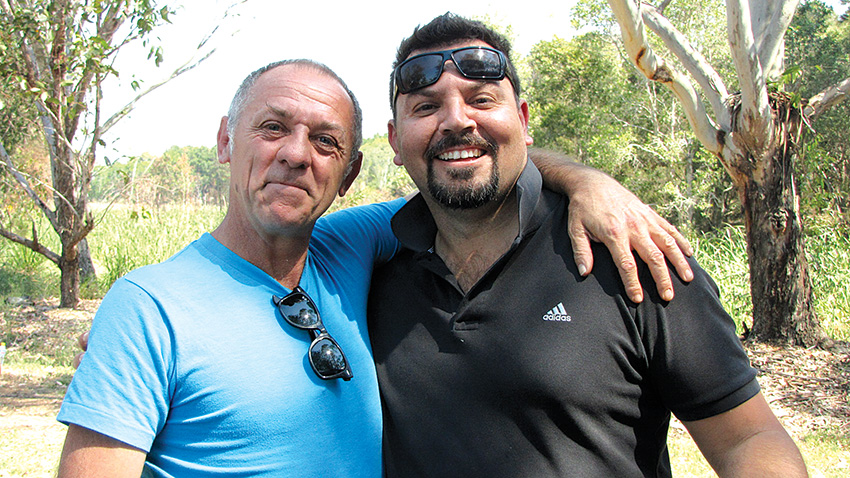 The Gods of Wheat STREET is a television drama series about three generations of the Freeburns.  It is about trying to make ends meet, about love and loss, jealousy and football – common everyday family issues. “So what?” you may think.

What makes it uncommon is that it is set in Casino in the Northern Rivers, right now in the present, yet the characters have names of gods, heroes and heroines from Celtic, Norse and Greek myths. One character is a ghost, a spirit with a touch of magic. It is both moving and funny, often at the same time. And oh, the cast referred to themselves as “Black to the Rafters”, because the Freeburns are a common Aboriginal family.

The writer and co-producer Jon Bell grew up in Casino and currently lives there. It is clear he knows the Freeburns in heart and soul, for better and worse and it is all up there on the screen for us to see. He is a “big believer in being who you are, in coming where you come from and in sharing blessings in the community.”

Jon had a common writer’s journey. His family split up when he was four years old and his mother raised him. He trained in dance in the early 90s at Northern Rivers Conservatorium, tried a year of Indigenous Studies at Southern Cross University in Lismore, went to NAISDA Dance College in Sydney for a year, tried law for a year, and studied music and acting at Eora College for a year.

The time to knuckle down arrived with a new-born daughter. Coming from such a strong performance background Jon needed a creative outlet. In 2001 he picked up a big, clunky camera and started making films, back in Casino. Editing happened in camera, press pause, set up the next shot and go on. “These days, technology has advanced so much that if you can find ten grand you can buy a camera, a couple of lenses, some editing software and make a movie.”

The demands of single parenting and holding down a job led to creating on the page, writing. Although Jon has watched so many films that he has absorbed how their stories are structured, he feels that his writing is more influenced by music and how songs work with melody and harmony. This is evident in how he shapes scenes and there is also a lot of music in The Gods of Wheat Street.

The last pillar that underpins this uncommonly captivating series is Narrative Therapy, which Jon encountered when working for DOCS. Narrative Therapy attempts to separate the person from the problem whilst holding to the notion that a person is formed by their life’s experiences and stories. This allows for a story to be told and re-told from a different point of view, not as a victim but as a survivor, or as a hero or heroine. Or even a god.

The result is a series filled with such heart and infectious humour that you cannot help but like and cheer on the Freeburns. Finding the humour in any situation is a way of getting people to care, but Jon Bell’s bigger intention was to change the way in which mass media portrays Indigenous people.

Some of the local Aboriginal people got to play extras. They and their families watch the show completely engrossed until they see themselves or someone they know. “Hey, there’s Trevor.” They get a kick out of seeing their own stories and their own people there on screen, and they see them differently. Television makes a person and situation appear larger than life. Shifting perspectives shifts expectations.