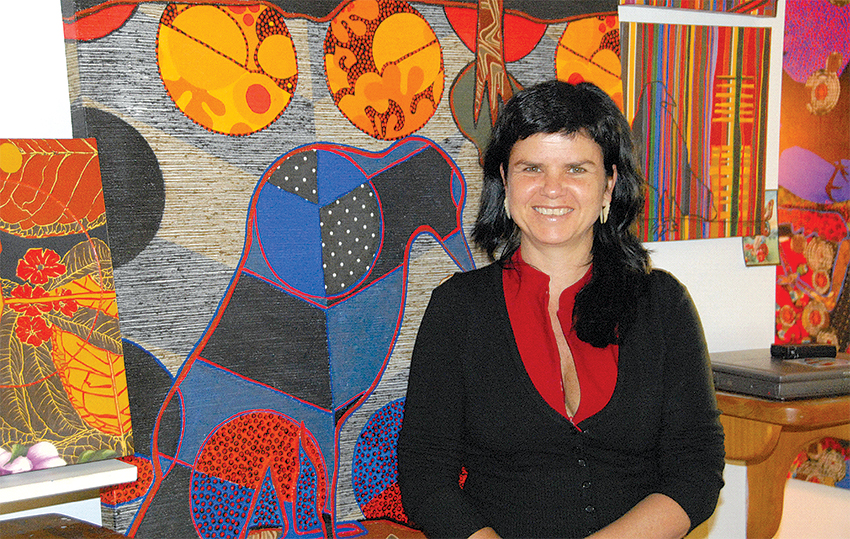 Karla Dickens draws on her memories to create stunning artworks.

If Karla played football like she made art, she’d probably be a winger, dancing and sidestepping down the field full of pace and quick, stylish moves. Then again, she might make a better team doctor. Her art, after all, is a vital medicine – for herself and for anyone else who cares to reach into its depths
– Maurice O’Riordan, Art Monthly Australia, 2011

When you are invited into Karla Dickens’ world – her comfy home near Lismore – your senses are driven into overload as she brings out some of her artworks from various bodies of work over the years.

This prolific artist works in a variety of media and has amassed an impressive creative output. The diversity, richness and attention to detail are entrancing for the viewer, but for Karla her works have been a form of therapy – a path to healing after a turbulent childhood.

A Wiradjuri woman, born in 1967 in southern Sydney, her work has been exhibited in more than 20 solo exhibitions, over thirty group shows and a large number of community-based projects. Karla has also gained a variety of teaching experience.

She is a successful, esteemed artist who works in a spirit of humility creating art fed from memories and sometimes dark places.

GPSpeak visited Karla at home to find out about her latest project which is the result of her winning the 2010 NSW Indigenous Arts Scholarship.

Her project involves translating the cross-cultural language of footy by visually exploring the continued influence the South Sydney Rabbitohs’ iconic rabbit logo has on the community and the NSW landscape.

“I, like most blackfellas in NSW live a cross-cultural life and share histories deserving of being told, showcased as authentic Aboriginal art embracing our reality of being the first to be invaded, settled and assimilated,” Karla explained.

Growing up around Redfern in Sydney, it was compulsory for Karla to attend Rabbitohs’ matches with her family. The conversation around the dinner table invariably centred on Rugby League – the communal language.

Now living in northern NSW, Karla said there were always images of rabbits around which reminded her of her time growing up in Redfern.

She is well into the project which comprises a collection of photos and paintings. These are going to be part of an art installation and Karla has also put together a movie with the South Sydney rabbit mascot starring alongside a statuesque Bundjalung drag queen called Destiny.

Karla explained that sport and art are the two primary areas where Indigenous people excel and achieve high profiles in both areas.

“They can stand up and have a voice and be acknowledged for their greatness which is also healing. That’s what this project was mainly about, bringing the arts and the footy culture together. Growing up there was no art, all football and sport.

“All my work over the years has been about my personal experiences because that’s what I know best.”

It was while driving back home from Sydney last year that the project came together in her mind.

“I was just noticing all the Rabbitohs’ memorabilia and signs but mainly the logo, mainly the rabbit around Redfern and as I drove back up the coast, that rabbit just seemed to follow me everywhere and then I got back to Lismore and they were still following me! They were on fellas’ jerseys and I was noticing red and green everywhere, on socks and stickers on cars, so the proposal I put in is about the rabbit, the Rabbitohs’ logo and how it moves around the landscape in NSW.”

Karla’s project will be exhibited this month at the First Draft Gallery in – where else? – Redfern in Sydney. She’s excited about having her work on display there as it’s a popular gallery with young artists and somewhere her work has never been shown.

Looking through some stills from the movie it becomes clear that the pull of the Rabbitohs is also about supporting the underdog. The photos have a surreal quality with the towering Housing Commission block and a gaggle of footy players resembling a corroboree dream.

Her troubled childhood provides a great source of inspiration for Karla and her art has been an important catalyst for healing.

“I guess it allows me to have a voice about different experiences and to reclaim those experiences in a positive life-affirming way rather than a dark, heavy kind of lingering baggage. So, over the years my whole work has been about really fundamental issues for me growing up. I’ve worked a lot with creating ‘gay art’ which has helped me go through the process of coming out and accepting my sexuality with my work touching on my identity and accepting my identity and my cross-cultural heritage, how that all comes together and who that makes me. I’ve also done a lot of work on the theme of death as I’ve had a lot of death in my life.

It was after the suicide of a dear friend that Karla was involved in an artist’s residency – a profound experience.

“There was the most incredible healing through that. I just locked myself away and did that work for her and for me. With the work ‘Now Here’ I was referring to being in the here and now and feeling nowhere at different times. Sometimes I’m here now and sometimes I feel like I’m nowhere. There are also works in the same series that use maps and talk about song lines.”

Another of Karla’s art projects is the Black Madonna, which was funded by an Arts Council of Australia grant. On her website Karla explains this work:

“The Black Madonna sits tight in the collective heart and mind, fully glorified and beloved for over thousands of years around the globe. The universal connection of this Icon for me as an Aboriginal woman and mother is very powerful, real and always encouraging. The Black Virgin connects me to my mother, grandmothers, Mother Earth and its children. The child is the expression of the spiritual nature of the feminine, it is the light which impregnates her and gives birth to the divine spirit.

“Woman all around the world find identification and strength in the beauty and darkness of her skin. ‘Black, Blacker than Black’ She does not only shine of scared light but she stands tall knowing suffering and endurance.”

The concept for the Black Madonna series arose from a very frightening paranormal experience that Karla’s daughter, six year- old Ginger had in the family home.

“She was about four and when we had a spirit come into the house, frightening the both of us, I finally plucked up the courage and spoke to a number of people including an Aboriginal elder. The house was then smoked and blessed. The Black Madonna series developed from that experience.

“So, creating this work has been about a physical and often daily manifestation in the protection against dark psychic energy. The Black Madonna is also known as a protector of children and of outlaws. I found it was incredibly soothing spiritually to work with her image and power. When I exhibited the show at Casula Powerhouse in Sydney many women from western Sydney, such a multicultural community, knew of the Black Madonna, and were more than ready to discuss her and the work. “Yet there were other people who assumed I was being smart, with one or two believing I was disrespecting The Virgin Mary. That idea could not be further from the truth as the Black Madonna has been a symbol of hope for centuries.”

A big lesson for Karla has also been that even when exploring darker issues, there is a need to engage the viewer first, sometimes with humour, almost tricking them to look deeper and question their original assumptions.

“Like the images that are going to be part of the exhibition about teenage years at the Lismore Regional gallery (opening on October 20) – with the beaded frocks – they are about domestic violence but I also wanted them to be pretty and attractive just like the many women that wear abuse and have to cover it up. “I want to engage people, I don’t want to frighten them or push them away. The Love Luck and Lust series was a very personal body of work, not just my story, but the store is of the women in my family,” she explained.

Karla freely admits that it’s her work that has kept her well. After overcoming an addiction in rehab and going to Art School in Sydney, she has been clean and sober for 20 years. “For me, the healing aspect has been where it all started. I used to get lost in my art when I was a small girl with lots of collage and bits and pieces, with my art literally saving my life at different times. Since then, I’ve done a lot of work in the community with people with mental health issues and hard tales of life to overcome. It’s always a privilege working with others I can relate to and share the truths about making honest work as a rewarding healer.”

In the near future, Karla is using her experience and her honesty about her life to work with some high security male Indigenous prisoners in Goulburn Jail. Karla and a number of other artists will conduct workshops resulting in an exhibition in mid- November at Goulburn Regional art Gallery.

“It’s very exciting. I’ve gone into jails before. I can be completely honest with my story without shame and I get to give a little bit back of my experiences, strength and hope. My art is such a big part of my life and I’ve seen so many people actually heal when they have some way to express themselves.”

To see more of Karla’s work, go to: www.karladickens.com.au