Attitudes to Aboriginal Australians’ health have changed enormously over the past 75 years. The Medical Journal of Australia which has been publishing since 1914 provides some insight into medical opinions in the first half of last century. Before 1950 there was a common belief in articles published in the MJA that Aboriginal people were doomed to extinction, and as a result medical services were neglected.(1)

However, this belief apparently changed in 1945 when a serious review of diseases presenting to Aboriginal medical clinics in the Northern Territory was for the first time published in the MJA. The author was Raymond T Binns, an army doctor.(2)

According to the review, during the army’s occupation of the Northern Territory (NT), a hospital was built on the banks of the Katherine River for the Aboriginal community accommodating 65 patients. The diseases presenting to this hospital and those encountered in remote visits to surrounding settlements were recorded. 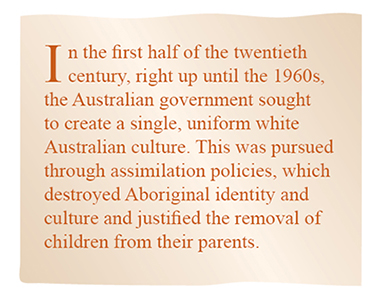 Interestingly, in these times there was no mention of obesity, diabetes and its complications or alcohol related disease that would be so prevalent today in the same communities. Many of the infectious diseases mentioned have been significantly reduced or eliminated with the help of immunisation and antibiotics. However, it was in the 1970s and beyond that type 2 diabetes became prevalent and has increased ever since.

If there is one thing that radically changed in the period 1950-70 it was the Aboriginal diet, from the traditional hunter gathering diet to a much higher energy diet along with reduced physical activity.

It was the time when Australia’s assimilation policy was being implemented and Aboriginal people were herded onto settlements and reserves against their will. One reason was to make way for stock-raising and agriculture by colonial settlers as well as xenophobic perceptions of other cultures. In addition to the mental trauma of dispossession from land and culture, obesogenic diets (largely junk food in today’s terms) were introduced through stores that were operating on settlements from the 1950s and there was not a choice of healthier food.

The produce available was white flour, sugar, tea, rice, tinned meat and salt beef. That meant more refined carbohydrates, less protein and vitamins than traditional diets. There was a serious shortage of fruit and vegetables. The cost of such food in more remote communities is still a major concern today.

In addition, the people were forced to give up their hunting and gathering. They were consuming processed food and exercise dwindled with sedentary lifestyles. Increasing consumption of alcohol and tobacco were also prevalent during this period.

There was a serious shortage of fruit and vegetables. The cost of such food in more remote communities is still a major concern today

The assimilation policy of the 1950-70s has had a major impact on the large gap in life expectancy between Aboriginal and non-Aboriginal people seen today. The reasons are complex but poverty, dispossession, racial discrimination, as well as the mental trauma suffered by the stolen generation and their descendants are major determinants of this outcome.

In this article, I describe a classic research paper by nutritionist Professor Kerin O’Dea on what would happen to carbohydrate and lipid metabolism if a group of type 2 diabetics from a Kimberley community were to return to a traditional hunter gatherer diet.