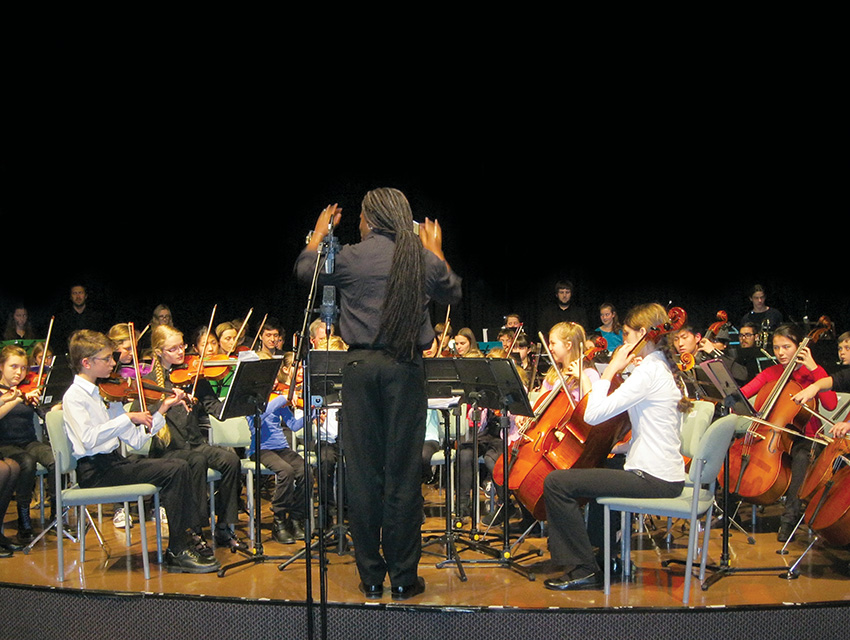 There are two golden rules for an orchestra: start together and finish together. The public doesn’t give a damn about what goes on in between

Learning to play an instrument well, any instrument, requires hours and hours, adding up to years of lonely and often frustrating practice. The chance to play as part of an orchestra is a golden opportunity. The Northern Rivers Conservatorium has just held its third Northern Rivers Youth Orchestra music camp for 65 students from the Clarence to the Tweed, regardless of their level of ability.

Luis Fernando Madrid was the guest conductor charged with instilling the golden rules. And to assist with all that goes on in between were 12 student buddies who travelled up from the Sydney Conservatorium and tutors from the Northern Rivers Conservatorium.

Luis hails from Cartagena in Colombia where he completed studies in piano and conducting. In 2010 he was awarded a scholarship to study for his Masters in conducting with Professor Imre Pallo at the Sydney Conservatorium. Having been awarded his Masters in 2013, Luis has been offered the opportunity to complete his Doctorate in pedagogical aspects of conducting.

As well as conducting orchestras in South America and Europe, Luis is a specialist in conducting choirs and wind ensembles. His skills have been much in demand in schools throughout New South Wales, particularly in Granville in western Sydney where he is working with disadvantaged children.

Luis admits that this work is challenging, as they often have to deal with social and domestic issues.

“Some are starting from zero but in a few weeks they can play some simple tunes. And when they are playing music they change. You can see it in their faces.”

It is because of his special rapport with children that Northern Rivers Conservatorium requested that Luis Fernando Madrid conduct their Youth Orchestra for the second year running.

The camp is three days of intensive music rehearsals and tutorials. The participants had prepared and learned the music prior to attending the camp. The different sections of the orchestra (strings, woodwind, brass, percussion) now rehearsed separately under the guidance of their tutors and student buddies. And there was a full orchestra rehearsal each day leading to a public concert on the final evening.

The conductor’s task is to bring the different sections together into a harmonious community. Luis introduces and emphasises orchestral etiquette, how to behave, how to follow instruction, the need to cooperate with and respect each other, not just the conductor. Luis said he found the children easy to work with and that he noticed that there had been progress from last year.

When they are playing music they change. You can see it in their faces

On the first morning the full orchestra rehearsal focuses on sight-reading of all the pieces and the players gaining a feel for the level of the conductor’s expectations. The first time through the concern is for accuracy of pitch. On the second morning the playing is better with evident gains in confidence. There is more listening to each other and “less dependence on the paper”, the written music. The emphasis is more on musical phrasing. After two days rehearsal, together and in sections, the level of improvement is significant. The third time through is more about the playing and enjoying the experience.

Luis is particularly interested in how learning to play music can give children and the wider community a different perspective on life, and playing together with others is not only fun, it makes us better people. Even when society fails to recognise the value of music making, and individuals struggle to believe they are worthy of playing and enjoying it, “Music is in itself a therapy.”

An orchestra is much greater than the sum of its parts. The undoubted feelings of accomplishment and the audience applause are immediate rewards. Longer term benefits are the lifting of spirit and sense of purpose derived from the collective encouragement of a group and inspirational leadership. A difficult challenge was mastered by starting and finishing together, and by enjoying what goes on in between. The final concert was a triumph.