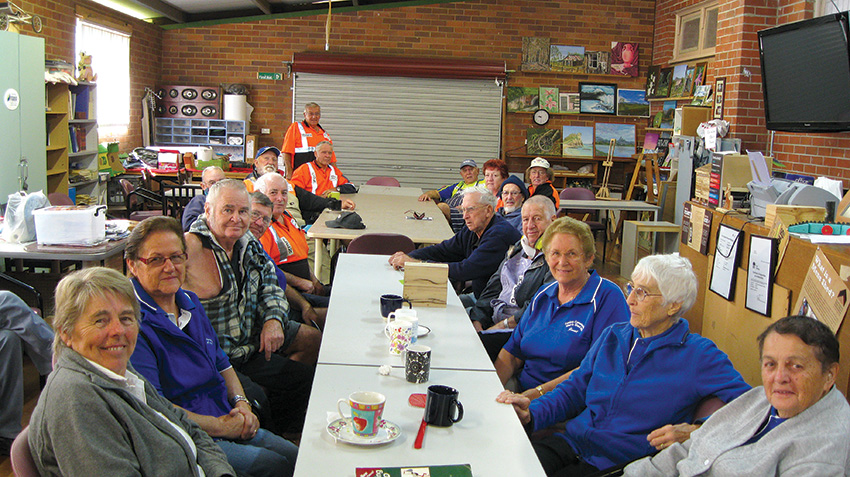 Monday morning tea at the Men's (and plenty of ladies) Shed

Men’s Sheds originated in Australia as a response to issues raised about men’s health, to encourage men of all ages to socialise and to take an interest in their own health and wellbeing.

Men’s Sheds offer men the opportunity to become part of a community, to connect to friends, and to keep an active mind and body by being productive. The Shed is also just a place where men can drop in to have a yarn and a cuppa if that is all they want.

Dean Box, the current President of Casino Men’s Shed puts it this way: “Men’s health is the important thing. If they make something on the side, well and good.”

There are over 1000 Men’s Sheds in Australia and each one is different, a reflection of its membership, their needs and available resources. There are five main areas of focus. Workshops for those who wish to remain active, clinical and communal focus on promoting men’s health and wellbeing, recreational to foster social activities, and educational courses and training in skills such as cooking or using computers. Most Sheds would touch on all bases while focusing their activities on one or two. Most important is that a Shed should be a happy, relaxing, welcoming and safe environment.

Casino Community Men’s Shed accepts women as members. In fact, a woman, Merrilyn Cottee started the shed and got it running after several failed attempts by groups of men. For the first 18 months there was no money and no shed but the members held a meeting every Monday regardless. They now have very fine facilities indeed at the Casino Show Pavilion in a mutually beneficial arrangement with the Richmond Valley Council. An underused Council building is occupied three days a week in exchange for upkeep of grounds and buildings. The one proviso is that the Shed moves out for the one week of the year that the local show is in town.

Casino Men’s Shed has about 80 members, around 15 women, and it meets Monday, Tuesday and Wednesday from 8am till 2pm. Mondays begin with a catered morning-tea meeting where any business is transacted and people can just sit around and chat. Women carers bring some of the men along. It costs $5 and there is usually enough left for lunch as well. The workshop is busy all three days and there are art classes on Wednesdays led by Kyogle artist Ruth Reardon.

More than one man said, “We like women here. Keep us in line.”

More than one man said, “We like women here. Keep us in line.”

Yet Dean explains, “New members often wander round overwhelmed, mope about and do little. Then we give them a fluoro shirt with their name [embroidered] on it and they are transformed. They’re into it.”

Members come from all walks of life. The Casino Men’s Shed does community work and projects, making toys, building nesting boxes for squirrel gliders, catering for the local drag races and BBQ fund raising at Bunnings and Woolies. They sell things they make at the Eltham Village Gallery.

The place is a hive. Get along on a Monday and catch the buzz. It’s good for your health.