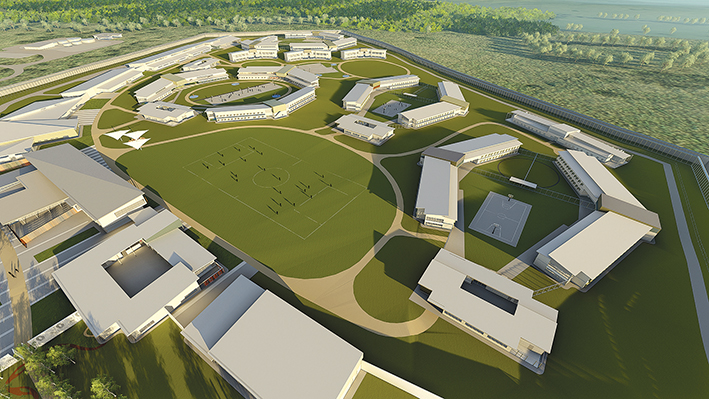 The country’s largest and most expensive facility currently being built near Grafton in northern NSW.

The critical state of health in the national prison system calls for improved communication with GPs in the community.

The nation’s prison system reveals a disturbing view of Australia’s public health. With increasing imprisonment rates, overrepresentation of vulnerable groups, incidents of unethical internal conditions, and the country’s largest and most expensive facility currently being built near Grafton in northern NSW, now is an appropriate time to reflect on the implications of incarceration on health in Australia.

According to Australian Bureau of Statistics figures in December 2018 the number of people in prisons has increased for the seventh consecutive year. In a recent one-year period, the number in corrective service custody increased by 4 per cent in Australia (2017-2018) — this includes unsentenced prisoners.  Similarly, there was a 3 per cent increase in the national imprisonment rate from 2017 to 2018, with female prisoners increasing by 10 per cent.

Most alarming is the high rate of Aboriginal and Torres Strait Islander people incarcerated—of the 42,779 full-time prisoners in Australia, 28 per cent are of Aboriginal and Torres Strait Islander descent, some 8 per cent of these women. Even more shocking is the proportion of juveniles in custody, of which 49 per cent are of Aboriginal or Torres Strait Islander descent. And, as outlined in an article from 2016 by criminologist Professor Chris Cunneen (UNSW), imprisonment rates have increased in the past 25 years since the Royal Commission into Aboriginal Deaths in Custody (1987-1991), despite its recommendations. Cunneen states that a move to a tougher, more intolerant criminal justice system—often increased by “political expedience and media-fuelled public alarm”— has resulted in jails becoming “human warehouses” for marginalised groups, especially Indigenous people.

The number of people in prisons has increased for the seventh consecutive year.

These figures are especially relevant now as Australia’s largest and most expensive jail — the Clarence Correctional Centre — is set to open in Lavadia near Grafton in 2020. A recent article in The Guardian noted that this $798 million ‘mega-prison’ with 1700 beds will be the largest facility contract ever awarded. This is to a consortium called Northern Pathways, including Macquarie Bank, the NSW government, and Serco which stands for service corporation. Its operations for customers include aviation, military weapons, detention centres, prisons and schools.

Northern Pathways tout the benefits of the Centre to the economy of the local community, with employment opportunities in the building and running phases. Meanwhile, community members express concern about potential adverse impacts of the jail, such as an overwhelming influx of employees and family of prisoners moving to the area, along with the financial and social stress this may cause. In a location with a large Indigenous population, locals have also expressed valid concerns about the construction of such a facility, saying they would rather see money spent in diversion, prevention, and rehabilitation than an ongoing cycle of imprisonment.

The opening of a facility like this one should encourage us to look further into the overall health of the nation’s prisoners.  When looking at mental health, an Australian Institute of Health and Welfare report (AIHW) on prisoner health from 2018 outlined that approximately 40 per cent of prison entrants and 37 per cent of prison discharges reported a previous diagnosis of a mental health condition. In one example, the prevalence of schizophrenia has been estimated to be between 2 and 5 per cent; this compares with lifetime prevalence rates for schizophrenia and psychotic disorders of between 0.3 and 1 per cent.

Likewise, drug and alcohol dependence rates are considerable in prisoners before going to prison, and this factor often contributes to criminal behaviour. In one example, Hepatitis C rates are high due to past injecting drug use, and this can be perpetuated through needle sharing among inmates. In turn, there is a lack of effective strategies to prevent viral transmission within jails. Researchers Jarryd Bartle (RMIT) and Nicole Lee (Curtin University) explained that the artificial environment of the prison system makes it difficult to know whether the skills learnt during treatment for drug and alcohol-related problems translate to the outside world, where there are a broader range of temptations and stresses.

These problems transfer to internal health care generally, as prisoners have no access to Medicare and their health care is managed and funded by NSW Justice Health and Forensic Mental Health Network. A GP is often asked for medical records for inmates when a person is imprisoned. However, when someone leaves the jail there is virtually no safe transfer of care through the Justice Health medical record system back to GPs, and this is a problem that needs to be addressed. Also lacking is adequate follow up of people leaving the justice system and integrating back into their community. Ideally there would be a proper handover of any medical issues managed in prison to a GP, as well as adequate follow up of the social determinants of health.

The social needs of inmates leaving the prison system also need to be taken into consideration. In fact, it is often the case that health and lifestyle improvements gained in prison can be lost when they are released. However, ensuring social needs are met once prisoners leave is easier said than done as the released prisoner is often homeless and frequently has no regular contact with a GP. If the prisoner is Aboriginal or Torres Strait Islander, they may have had contact with an Aboriginal Medical Service, and a handover to such a service would be helpful.

Rehabilitation programs — such as drug and alcohol counselling, relationship and anger management, trade skills development, and assistance with housing matters — are helpful. For Aboriginal and Torres Strait Islanders, a cultural program, including input from Elders, is very well received and helps with the healing process. Non-Indigenous residents can benefit from similar programs too, as they are highly likely to also come from a marginalised environment. In some regions there is a step-down process through a diversionary facility for completion of a sentencing; here programs lasting for six months are offered to make the transition back to community more manageable.

The greatest contribution that could be made to help the mental and spiritual rehabilitation of people in the justice system is to provide them with hope for a better life in the future. This is not easy to achieve, but there are plenty of models in Australia, and around the world, where good progress has been made. For example, education for young offenders in custody, when done properly, has shown to be a ‘circuit breaker’ from a life of crime.  There is an intergenerational element to this cycle, too, as children of people who have been in prison are six times more likely to also become prisoners. Youth detention centres should focus on education and there are good models for this. Also, follow-up education after detention is vital to prevent released prisoners reoffending.

Of course, rehabilitation comes at a financial cost to the facility, but this has to be weighed up against the higher cost of recidivism. For example, the Institute of Public Affairs estimates the cost of putting one person behind bars for a year in Australia is nearly $110,000. The Organisation for Economic Co-operation and Development states the average annual cost per person is $69,000. Almost 60 per cent of prisoners have been imprisoned before, with 45 per cent of prisoners released during 2013 and 2014 returned within two years. The annual cost of Australia’s prison system is around $4 billion. These figures beg the question: do rising incarceration rates reflect crime rates? The answer is no: despite an increase in sexual assaults, drug and fraud-related crime, overall crime rates are falling.

From my experience as a GP treating patients within this system, I can attest that Australian prisons are often places where people remain out of sight and out of mind. There is also a disturbing overrepresentation of vulnerable and marginalised groups, especially Aboriginal and Torres Strait Islander peoples, who require culturally-specific care and pathways to recovery due to an ongoing experience of trauma, racism, poverty, and institutional neglect and abuse. Due to this, and other reasons outlined in this article, there is a dire need for better communication between Justice Health and GPs in the community.

The current ‘tough on crime’ approach is clearly not working or contributing to community safety; other diversionary models for punishment and deterring crime need to be sought in Australia. This is not only a justice and corrective services issue; it is also a significant public health issue. If we are serious about public health in our community we need to give more consideration to those who are incarcerated, as the statistics for imprisonment and recidivism are alarming and worsening. Without an active reappraisal of this issue, the cycle will continue, requiring the construction of more “mega-jails” at great detriment to our nation and its health.