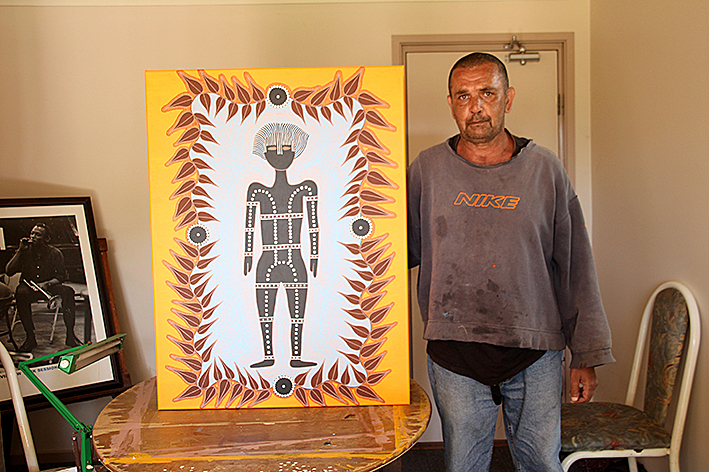 As a friend and health advisor to Adrian Cameron over many years I have always found his artwork has had a deep impression on me. It has a strong connection with the Bundjalung Nation and depicts an ancient cultural connection to the land, animals and the Dreamtime.

Through his work I have gained a better understanding of the Bundjalung culture as well as the ramifications of socio-economic disadvantage of Indigenous people living in our community.

His own story of adversity is unimaginable to most of us. A journey that involved estrangement from family, residential boys homes, abuse and disrespect, racial discrimination, teenage rage and rebellion, drugs and alcohol.

Then came the incarceration roundabout of crime and gaol that is all too common within our Indigenous community. The longer term ramifications of this strife and the social damage that results require a long healing process. However in Adrian’s journey there seems to be hope for him, his family and his community.

This happens to be largely through his art. This is his refuge from the chaotic world he is exposed to. Painting gives him some solace. So much safer than the past use of mind altering illicit drugs, but more importantly so much more effective in dealing with the pain of past emotional trauma.

Adrian is a talented but relatively unknown Bundjalung artist. But this may change as people recognise the depth of meaning and courage expressed through his work.

Where one heads in life depends to a significant degree on opportunity, but there is a deeper intrinsic force and spirit driving those who are born without opportunity.

Like so many others, Adrian – or ‘Cheesy’, as he is known – is using his creativity to build resilience and wellbeing.

Every dot in ‘Clever Fella’, the extraordinary artwork on the cover of this issue of GP Speak, was done using a matchstick. Not surprisingly, it took the artist six months to complete.

Lismore-born Bundjalung man Adrian (‘Cheesy’) Cameron painted this work on commission for a local medical practitioner. Other examples of his paintings have been exhibited in the Northern Rivers over recent years.

We thank Adrian for giving permission to mention that his life has included considerable hardship and significant health issues. His obvious talent shines through, showing that painting is not only therapeutic, but stretches his creative instincts and helps keep the Bundjalung nation’s culture alive.

The ‘clever fella’, the subject of my painting, played an important part in Aboriginal culture for the Bundjalung people. He was a healer who could use his knowledge of plant life for medicinal purposes to heal people in the tribe. And he was known as the one who upheld the ‘lore’ if anyone in the tribe broke it.

The clever fella was also known for mystical and spiritual powers, which he would use to captivate people.