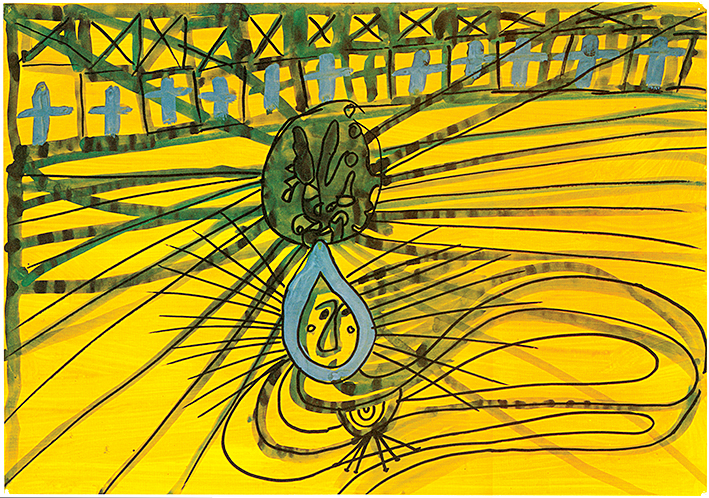 In the late 19th and early 20th century, people became fascinated with the art of the insane or ‘outsider art’ as it is known. These were times when people with serious mental illness, such as schizophrenia or psychotic depression, were incarcerated in asylums, and treatments were largely ineffective.

One treatment that was taken seriously, however, was art therapy and many of these people produced art that reflected their mental state and may have given some relief to their suffering, at least temporarily.

At this time modern art was becoming more abstract with Dadaism and Surrealism. Some famous artists such as Paul Klee, Max Ernst and Jean Dubuffet gained some of their inspiration from art produced by the mentally ill in asylums.

“I want to replace Western Art with that of the jungle, the lavatory, the mental institution – “art brut” – Jean Dubuffet, who first brought the Art of the Insane into cultural consciousness

In the 1970s the drug company Sandoz (who made Melleril) produced a series of prints done by people in asylums which they called “Psychopathology and Pictorial Expression”. The prints came with a case history written by psychiatrist, Dr Alfred Bader who was Medical Superintendent of the Psychiatric Clinic of the University of Lausanne in Switzerland. The company gave them to doctors all over the world. No doubt the introduction of antipsychotic drugs dulled the creativity of patients receiving such treatment.

Of course times have changed, and medical treatments for calming severely disturbed people have improved, enabling them to live in less institutionalised environments. This had led to moves to manage people with serious mental illness in the community rather than in asylums.

Psychiatrists once encouraged the use of art as an activity for the severely mentally ill in asylums. They came to appreciate this art as unique, straight from the heart and free of outside influence. They now rely on antipsychotics and antidepressants to reduce mental suffering.

Has this resulted in the demise of outsider art? Or are people with mental illness still producing a style of work reflecting their emotional state, unencumbered by artistic trends and what other people think? Google ‘outsider artists’ and the work of many practising artists will appear.
Is this type of art practice therapeutic?

The origins of outsider art

The term outsider art was coined by art critic Roger Cardinal in 1972 as an English synonym for art brut ( “raw art” or “rough art”), a label created by French artist Jean Dubuffet in 1945 to describe art created outside the boundaries of official culture; Dubuffet focused particularly on art by insane-asylum inmates. (Wikipedia).

Jean Dubuffet first described this type of art as “drawings, paintings, all works of art emanating from obscure personalities, maniacs: arising from spontaneous impulses, animated by fantasy, even delirium; and strangers to the beaten track of catalogued art.” (From a letter Dubuffet wrote to the Swiss painter Rene Auberjonois in August 1945 – as described in Art Brut, The Origins of Outsider Art by Lucienne Peiry)