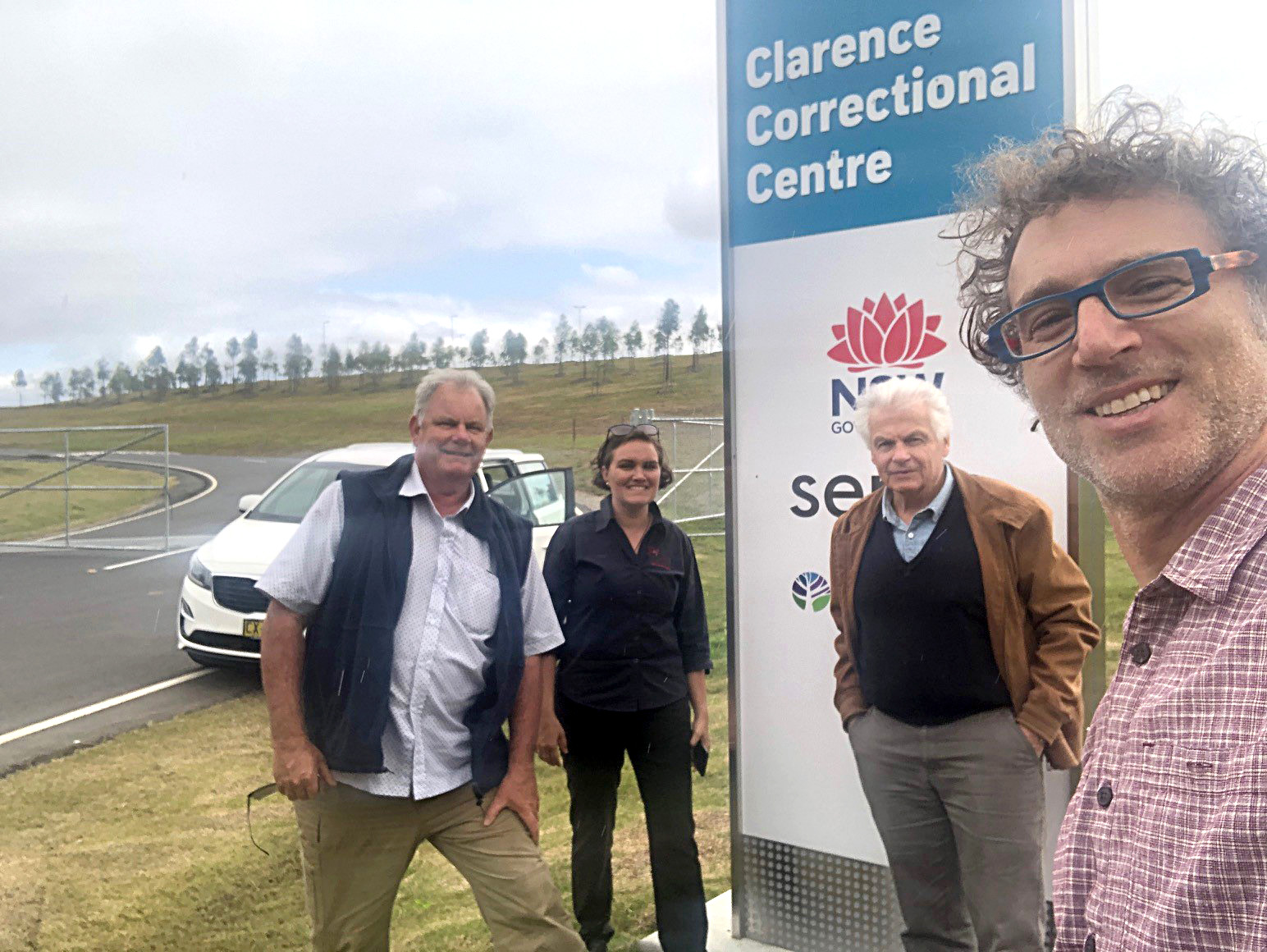 The City of Grafton is a place of mixed blessings. Famed for its annual Jacaranda Festival, when street trees burst into purple blossom, it is also the place where a stone-walled jail, opened in 1862, drew criticism over the years for the cruelty of its warders.

Now the area is becoming famous for the establishment, at a nearby location, of Australia’s newest and biggest prison, the Clarence Correctional Centre (CCC), a 1700-prisoner facility that state MP Chris Gulaptis (Nats, Clarence) hails as having “world class facilities” and offering a “responsible prisoner model” offering job search prospects upon release

Gone are the days when arrivals at Grafton jail were forced to run the gauntlet of baton wielding warders positioned to show new prisoners who was boss. The ritual was known as the “reception biff” and drew condemnation from the Nagle Royal Commission into NSW prisons.

In this new era, as Mr Gulaptis extolls, “prisoners will be able to use tablets for visits bookings, employment scheduling and study.”

Local employment opportunities are touted as a major benefit to the economy of an area experiencing even greater social disadvantage than the Northern Rivers generally, a region facing many challenges, despite its appeal as a tourist destination.

Following the construction phase, when the workforce peaked at around 1,200, the CCC is said to employ 600 people. Up to 1000 beds will be in maximum security, with at least 30 prisoners released per day. Alarmingly, it is estimated that 50 per cent of these will become homeless upon release. The area bounded by Tweed Heads and Coffs Harbour, including Byron Bay, has a high homeless state and a disturbing number of ‘rough sleepers’.

Questions have been raised about the capacity of community health organisations, including the regional hospitals (Grafton, Coffs Harbour and the smaller Maclean facility are the closest), to deal with a likely increased workload.

An extensive report conducted this year by the not-for-profit Social Futures, in conjunction with the Deloittes consultancy, assessed Clarence Valley’s health and social service capacity. Despite focusing on a government owned facility, albeit managed by the private Serco group, the document has had no public release and has only been circulated to organisations involved with the care of released prisoners – with a legal injunction implying action in the event of any ‘leaks’. Questions from this magazine about the report’s findings have not been responded to.

One significant problem identified is a shortage of housing in the region for prison staff and prisoners’ families, as well as concerns about already overloaded regional health and social services being able to handle the expected increased workload.

A key issue for GPs and other health professionals who may be asked to care for released prisoners is the secure encrypted transfer of medical records to their practice. Major advances have been made with this between public hospitals and GPs over the last two decades. The same is urgently needed from NSW Justice Health to GPs wherever they practice.

If Governments are serious about reducing our high recidivism rates a range of social and cultural determinants of health need to be addressed and properly funded. There needs to be more emphasis and money spent on diversionary health measures to address complex chronic mental and physical health diseases, domestic violence, homelessness matters, and so on.

The continuing ‘tough on crime’ approach is especially failing Aboriginal and Torres Strait Islander prisoners, for whom incarceration rates are still rising disproportionally. There is no reason to think this will not be seen in Grafton’s CCC.

Within this context, it is encouraging to see the 16 items on the 2020 Closing the Gap targets, in particular target number 10. The outcome aimed for this is that Aboriginal and Torres Strait Islanders adults should not be over-represented in the criminal justice system. The target by 2031 is to reduce the rate of ATSI adults held in incarceration by at least 15 per cent.

The big question is how is this to be achieved? An article called Spiritual Fatigue by Gamilaraay academic, Prof Bob Morgan explains how the social and cultural determinants of health need to be the focus. On page … there is also an article on ways to reduce the number of young people incarcerated by targeting those with cognitive impairment and referring them to a diversionary program rather than sending them prison for a relatively minor crime.

A recent visit to the CCC by CEO Rekindling the Spirit, Georgina Cohen, RN Balund-a/Jullums John Llewellyn, GP Peter Silberberg and myself was an eye opener for its size and infrastructure. It has the most advanced systems imaginable for secure incarceration.

Contraband smuggled into jails is a worldwide problem and happens significantly in Australian jails too. The measures to reduce this problem were demonstrated to us, with security systems far more sophisticated than an airport.

While there were no barred windows there were plenty of near impenetrable, see-through ones. We were shown the emergency health facility, similar to what one may see in an accident and emergency department in a rural public hospital.

We spoke with Serco’s Health Services Manager Stephen Joyce and Dr Trish Collie, an addiction specialist physician. Important issues for us were addressed by the health team and good progress was made in developing a professional working relationship. Sharing medical records after custodial patient consent with primary health care teams, wherever they may be, was a discussion priority.

Whatever one’s view on the issues surrounding complex cultural, socioeconomic, historical and trauma issues that often lead to imprisonment, there is an opportunity with this new facility to address health issues for such prisoners, whether as inmates or post-release. It is up to us all to respond as best we can and to advocate for the health and wellbeing of this severely disadvantaged group in our community.