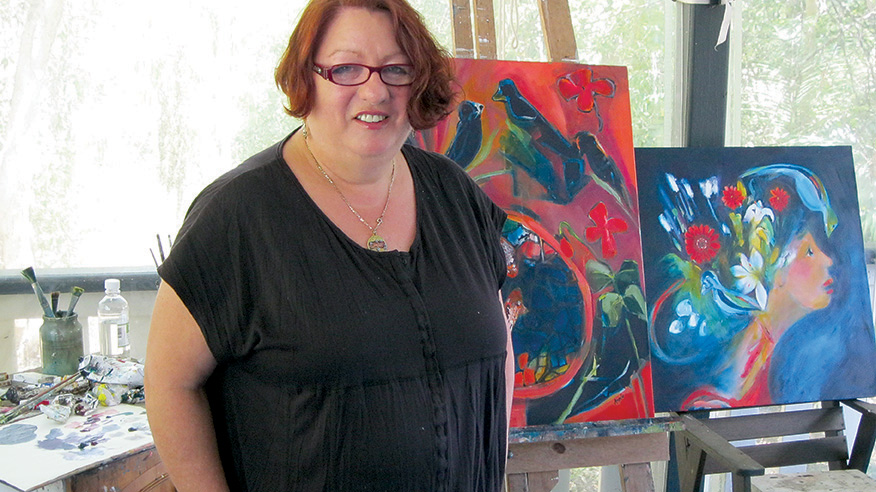 Angela Bettess in her studio

“I simply ask, can any woman, in truth, serve two masters and be faithful to both?”

This quote from the 1998 movie Elizabeth starring Cate Blanchett is a rhetorical paraphrase of Matthew 6:24 in the New Testament. Blanchett’s Queen Elizabeth I asked it of men, but for Dr Angela Bettess it articulated a life and career-changing dilemma.

After dedicating more than 25 years to working as a GP, Angela gave up doctoring to become a visual artist. Why and how does someone decide to do that? Surrender a healthy income and good standing in the community for the uncertainties of creative endeavour and the odd raised eyebrow?

The simple answer is contained in the name Angela Bettess chose for her November exhibition in Brisbane – Fascinated by Colour. And, like overnight success stories, life-changing decisions do not just appear, they take a lifetime.

Angela’s mother was a tailoress and as a child Angela loved the vivid colours of threads and patterns. Her mother fed this passion with visits to fabric stores and encouraged sewing and needlework. Angela did little art at high school where she proved to have a greater affinity for sciences than humanities. The combination of her interests in people and the sciences led her to train in medicine. And as one of the few professions wherein women were considered equal to men, medicine was increasingly becoming a good career choice for women.

It wasn’t until her daughter did art at high school that Angela’s horizons widened. She began taking drawing classes and workshops at TAFE and with local artists on weekends. Like someone with an unknown and unquenched thirst, having sipped at the stream, Angela found herself being drawn further and further into the depths.

To complete a Certificate II in Art, Angela attended TAFE for two days a week; the Certificate III was three days a week and four days for the Diploma. The course work was increasingly challenging and she really enjoyed it but had to cut down working as a GP. The need to show and sell her work online meant a further Diploma in Web Design.

Some of Angela’s work found its way amongst the artworks on the walls of Goonellabah Medical Centre (GMC) where she practiced. Her colleagues encouraged her and Dr Andrew Binns was ‘an amazing mentor’. One of the enjoyable things about GMC is that sitting in the waiting areas you can look at the art and be distracted, uplifted by its beauty or stimulated to do your own.

Life is a struggle in making choices. You never know what opportunities lie ahead. Something in the art and therapy line perhaps

Angela art, and this exhibition in particular, which includes multi-media works, is all about colour. She loves animals, and birds, and cats, dogs and flowers feature prominently. She wants her paintings to be positive and uplifting and uses colour for a sense of fun, to be intriguing. In one painting an old lady wearing a hat seems to be hiding in a bid of flowers, inspired by a neighbour from years ago.

Creativity is a demanding mistress, medicine a stern master. Both require attention to detail and follow up. Both take you over completely.

Angela continued to serve both until three years ago when some health problems gave her pause. Though she misses the collegiality of medicine and the interaction with patients, she decided to take some time off to follow her interests in the visual arts. Angela continues to involve herself in the administrative side of medicine, organising meetings and with Northern Rivers Arts Health and Wellbeing Inc, as well as the Northern Rivers General Practice Network, doing web and design work.

But art took over. ‘Life is a struggle in making choices. You never know what opportunities lie ahead. Something in the art and therapy line perhaps,” said Angela.

A final thought about art and wellbeing from Hippocrates, he of the physician’s oath: Life is short, art long, opportunity fleeting, experience treacherous, judgment difficult.”