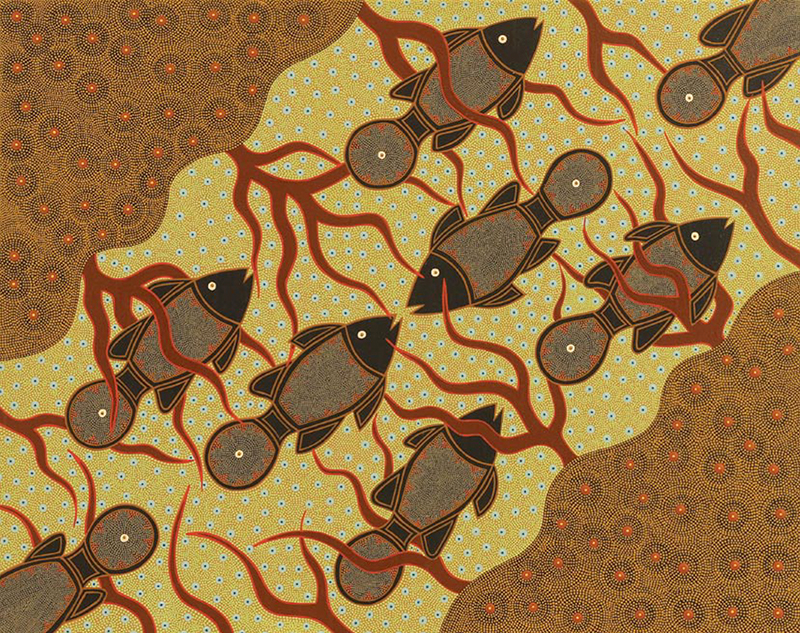 One of the most unusual art exhibitions to be staged in the area opens at Lismore Regional Art Gallery in December. Widjabul Dreaming is one of the last shows to be held at the Molesworth Street building prior to the opening of the city’s grand new exhibition space in mid-2017.

A 20-year retrospective exhibition by Bundjalung artist Adrian Cameron’s, the show features many works created while the artist was in prison (he is now free, and continues to paint).

The intimate connection of Aboriginal people with the land, environment and spirit of the Dreaming is encapsulated in Adrian’s meticulous and mesmerising paintings, done with a match stick dipped into acrylic paints, one dot at a time.

He likens the technique to an “astral journey to his culture”, producing a calming, therapeutic effect. Painting played a significant part in maintaining his spirits during his long confinement, Adrian says, adding that without this activity his despair would have led him to the point of contemplating suicide.

A collection of his jail paintings done in 1996 resurfaced recently and has been restored and reframed for Jullums, Lismore’s Aboriginal Medical Service. Along with newer work, these will be on loan for the exhibition.

“To see a group of these paintings together is a chance to appreciate the delicacy and spiritual power of the work,” says Dr Andrew Binns a long-time fan of Adrian’s work.

It is well accepted that meaningful activities for prisoners are important and can lead to less likelihood of recidivism after release. The therapeutic value of creating art is a positive note amidst the generally bleak prison experience for Aboriginal people.

However, there are seldom opportunities for non-Indigenous people to view such works, and in so doing to gain a deeper understanding of the importance of Aboriginal culture.

In Victoria there is now legislation that will allow Aboriginal artists in prison to be able to sell their art. This has the potential to provide some much-needed income and to bolster a sense of meaning and purpose for the creators of the works.

For the past 15 years, Darwin’s now closed Fannie Bay Gaol, a grim tourist attraction, has hosted Behind the Wire, showcasing artworks by prisoners in the NT’s correctional facilities. The exhibition is invariably a sell-out, further proof of the Territory’s – and the nation’s – incarcerated talent.

The late Dr Pamela Johnston, a well-known Aboriginal artist, did extensive teaching in jails using art workshops for healing and empowerment of Aboriginal prisoners. In an essay “Talking You Talking Me Talking Aborigine” she wrote:

‘Through painting and the exploration of culture and identity my students have been led into a desire for a wider language. Given current recidivism rates many of my students have become quite skilled. It is a sad indictment that young Aboriginal people have more chance of being exposed to structured educational processes inside prison than they would outside prison.

Where traditional European society is a literate society – by that I mean that written word is the predominant language of communication, documentation and expression, for Aboriginal individuals and communities a visual language fulfills that role… This is where Aboriginal art classes are so important, particularly in a Correctional setting and this is their difference from the non-Aboriginal art classes, which I emphasise here, also have a vital role to play in education and in society.’

“Where one heads in life depends to a significant degree on opportunity, but there is a deeper intrinsic force and spirit driving those who are born without opportunity,” says Dr. Binns.

“Like so many others he’s using his creativity to build resilience and wellbeing. His exhibition is an inspiration and one that can take you on a journey to the ancient past.”